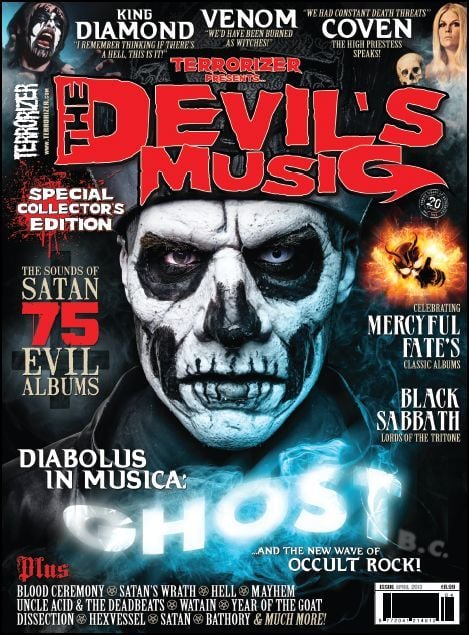 Terrorizer Presents The Devil's Music... the definitive story of the influence of the dark side on music:

THE DEVIL’S MUSIC
Musicians making pacts with The Devil – it’s happened throughout time. We flip through the history books to investigate just how much the horned one has enjoyed dabbling in the creative arts.

COVEN
Death threats, ritualistic sex and an album that turned rock music on its head forevermore. The ultimate witch of Rock Jinx Dawson reveals all.

DOOM
From Black Sabbath to Cathedral to Electric Wizard, the doom movement’s relationship with the darkside is explored and dissected.

BLACK SABBATH
Pioneers of the metal world, and a band that brought fear into God botherers everywhere – former drummer Bill Ward looks back at their illustrious career.

MERCYFUL FATE
30 years since it was unleashed we celebrate Mercyful Fate’s ‘Melissa’ and its follow-up ‘Don’t Break The Oath’ with an in-depth reflection of both albums from frontman and metal legend King Diamond.

THE CULTURE OF DARK, SATANIC AND RITUALISTIC MUSIC
Rituals, pentagrams, Satanic Bibles – we dissect the elements of evil and the culture that exists.

THE DEVIL’S FLICKS
Winterfylleth’s Simon Lucas explores the (un)healthy relationship between heavy metal and horror movies and looks at some of the most vital horror and occult-inspired films. Are you sitting comfortably?

BLACK METAL
Satanism, goats, sacrifices… Black metal is a genre of essential Hell songs. Tracing the origins of the genre and celebrating the forefathers; Cradle of Filth’s Dani Filth recounts tales of the second generation, and we finish off looking at the pure ritualistic side of this ultimately evil genre.

CRONOS
His band is called Venom, he’s been at war with Satan, he’s been possessed, and he invented black metal – this is the world created by Cronos!

DISSECTION
In one of the last times he was interviewed for Terrorizer, Dissection’s frontman Jon Nödtveidt talks about his interest in Satanism.

HIGH PRIESTESSES - GIRLS UNDER THE OATH
Without all-powerful women leading the charge, the Left Hand Path would not be a path worth treading. We celebrate the dominant force in occult rock.

KING DIAMOND
The Godfather of Evil – King Diamond talks frankly about being the true Dark Lord of Metal!

NWOBHM
The world’s most important movement in the history of heavy metal was steeped in bands celebrating the dark side – from Satan to Hell, Witchfyde to Demon. But just how dark were our British bands? We talk to the pioneers to find out.

HELL
Straight from the fiery pits, Hell’s Kev Bower recalls the origins of the band that were in league with Lucifer – at least by name association.

SATAN
Upsetting the local vicar, a band so evil they named their band after the Dark Lord himself. Satan frontman Brian Ross lifts the lid on these ‘evil’ times.

THE DEVIL’S TUNES
We bring you the 75 most essential Luciferian jams that’ll have you signing your pact and dancing with the devil for all eternity.

A-Z OF DEVIL’S MUSIC
C is for Church Burning but what about the rest of the alphabet? Taking the devil’s music right back to basic principles.

WHITE METAL
Does The devil have all the best tunes? Perhaps there is some goodness on the other side.

PAGANISM
Martin Walkyier – frontman with Sabbat/ Skyclad and The Clan Destined – looks at an alternative to the darkside – Paganism.

JAZ COLEMAN
As the leader of Killing Joke, Jaz Coleman has recorded music in Egyptian Pyramids, dabbled in the occult and has a plethora of stories to tell having survived it all!

IN SOLITUDE
Sweden’s rising metallers In Solitude discuss the inspiration of Satanism in their world in this classic Terrorizer interview.

NEW SACRIFICES: THE DEVIL’S NEW BREED
The Devil’s grip on music isn’t letting up just yet – from Ghost to Satan’s Wrath to Year Of The Goat – we raise our horns to the bands that continue to Hail Satan!